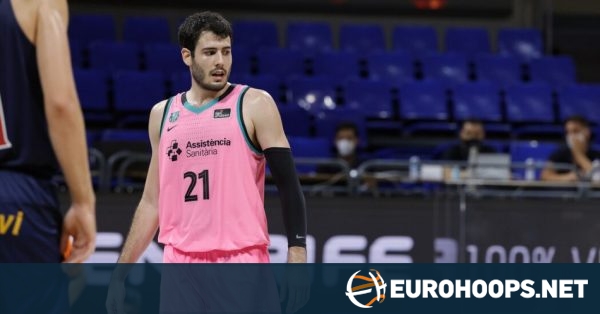 Barcelona keeps up its winning streak in Spain and took down fellow EuroLeague competitors Valencia with an 80-64 victory on the road on Sunday to improve to a 22-3 record in the ACB standings.

Alex Abrines led Barca with a 23-point performance, along with 5 rebounds and Nikola Mirotic had 11 points, 5 rebounds. Brandon Davies and Adam Hanga dropped 8 points each, while Sarunas Jasikevicius also lacked Cory Higgins who has been sidelined with foot pain.

Mike Tobey had 13 points, 5 rebounds for the hosts and Vanja Marinkovic tapped 9 points, as Valencia suffered its second consecutive defeat to fall to a 17-9 record.

Earlier in the day, Real Madrid also kept up its winning ways with a comfortable 95-77 win over Real Betis and remains in charge with a 24-1 record.

Youssou Ndoye and Jeromy Randle both had 16 points for Betis.

The post Abrines leads Barcelona to victory over Valencia appeared first on Eurohoops.

Valencia Basket, back with the coach of the next …