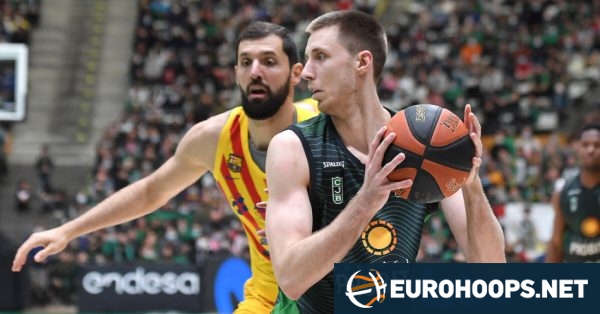 Ante Tomic posted 21 points plus five rebounds against his former team while Andres Feliz scored 21 points of his own as Joventut Badalona triumphed over Barcelona 81 – 72 in the Catalan derby of the ACB League. Badalona now co-inhabit the third place in the standings with BAXI Manresa.

Simon Birgander added 15 points plus 11 rebounds for Badalona that led from near start to finish and was up by double figures for the majority of the game. The hosts closed halftime with a 50 – 34 advantage and went on to go ahead even by 17 points in the third period.

Barca trimmed that margin to nine early in the fourth quarter but that was the closest they went. The loss itself didn’t hurt the ACB standings leaders as bad as Brandon Davies’ apparent elbow injury.

“We will have to see it,” Barca coach Sarunas Jasikevicius said after the game. “Right now it looks like he’s going to miss some time. This is life”.

Davies, who was hurt just five seconds before the finale, was Barca’s leading performer with 19 points, eight rebounds and five assists. Nikola Mirotic (14 points) and Nick Calathes (11 points) also scored in double figures for the Blaugrana.

In an ACB all-Basque clash, Baskonia overpowered Bilbao 90 – 62 on the road behind 19 points and five rebounds by Matt Costello.

Stellar appearance of Deck to put Madrid in the semifinals