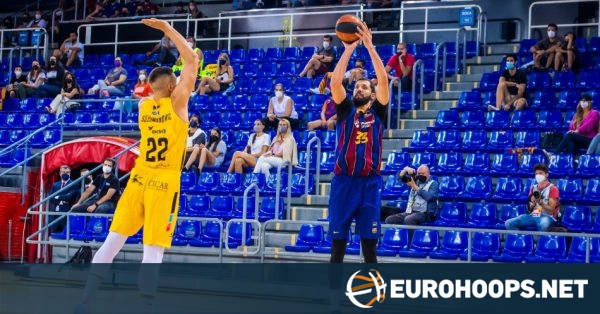 Barcelona scored 40 points in a single period (a new all-time playoffs record, per MisterChip) en route to crushing Iberostar Tenerife 112 – 69 in the opener of the Spanish ACB League semifinals.

Nikola Mirotic scored 21 points to lead Barca’s offensive showtime that included 17-32 3-pointers. Leandro Bolmaro had 17 points and Alex Abrines 16 points plus six rebounds for the Blaugrana that overpowered their opponents 40 – 18 in the third quarter. Tenerife that had put up a fight in the first half (43 – 36) was unable to put on a reaction for the rest of the game.

Fran Guerra (14 points) and Marcelinho Huertas (12 points) scored in doubles figures from Tenerife that will look to recover in a must-do Game 2 at home.

Coosur Betis brings Pasecniks back to the ACB, another one …

Dino Radoncic: “Two years ago he wanted to stop playing, he hates it…