Barca moves to Finals after intense Game 4 vs. Badalona 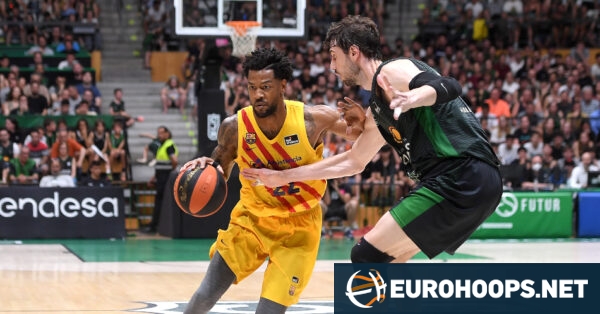 Barcelona qualified for the Spanish ACB League Finals after beating Joventut Badalona 63 – 60 in a dramatic Game 4 battle. The Blaugrana won the series 3-1 and will now defend their title against archrival Real Madrid in a rematch of last season’s championship series and also the 2022 EuroLeague semifinal.

Ante Tomic had 15 points and 10 rebounds while Derek Willis scored 14 (10 in the final period) for a Joventut team that led 28 – 19 (!) at the break yet saw Barcelona coming back in the second half.

After erasing its halftime deficit, Barcelona led 48 – 56 with 2:54 remaining following a 5 – 13 run. Willis scored six straight points and then Tomic hit the floater to tie the score with 1:18 left on the game clock.

Calathes faked and answered with the same currency on the other end while Badalona missed opportunities to go ahead (a 3-point attempt by Pau Ribas) or tie the score (a hook shot by Tomic).

Nigel Hayes-Davis hit free throws for the 56 – 61 and then Mirotic added a pair of his own to make it 58 – 62. Tomic scored a basket with a second left and Badalona tried to steal the ball to no avail.

The post Barca moves to Finals after intense Game 4 vs. Badalona appeared first on .

Laprovittola’s message after his arrival at Barça: “He looked for me …

The Estudiantes down in its fourth decline after years living …