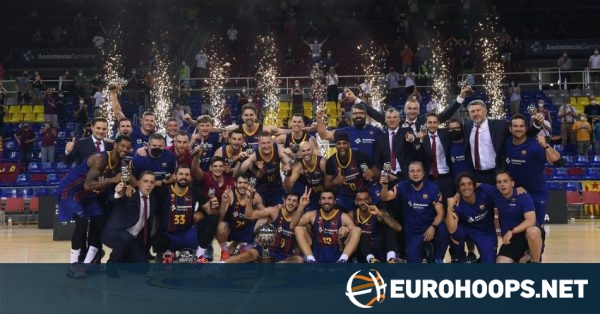 Seven years. That’s how long Barcelona waited to celebrate a championship title in the Spanish ACB League. Never before had the club been without this trophy for so many consecutive years since its emergence as a powerhouse in the early 1980s.

This long wait is now over.

Nikola Mirotic scored a season-high 27 points and was named Finals MVP as Barcelona crushed Real Madrid 92 – 73 in Game 2 to sweep the best-of-three series and win its first domestic championship since 2014 and 19th overall in the history of the club.

Nick Calathes posted 15 points and seven assists for Barca while Kyle Kuric scored 12. They both won the ACB for the first time in their careers.

20 years after he led Barca to championship and claiming a Finals MVP award, Pau Gasol had 11 points and six rebounds in 19:56 minutes of what is most likely the last game of his pro career. Sarunas Jasikevicius called the Spanish great to the bench with some minutes remaining so that the crowd Palau Blaugrana could give him a much-deserved standing ovation.

“I’m sad we couldn’t win the European Trophy for Pau. Maybe he will rest a week and change his mind,” Jasikevicius joked after the match. Gasol, who is expected to join the Spanish national team for the Olympic Games, didn’t give a certain answer on whether this was indeed his final appearance with a club.

Alberto Abalde dropped 15 points and Edy Tavares added 12 points plus six rebounds for Real Madrid that had an uphill battle to fight due to several injury problems. The “Blancos” were minus forward Trey Thompkins in the playoffs and lacked guard Nicolas Laprovittola for the Finals. Ultimately, they didn’t manage to be competitive in Game 2, trailing from start to finish.

Real Madrid finished the season being a completely different squad than the one of the beginning. Pablo Laso saw guard Facu Campazzo and forward Gabriel Deck leaving for the Denver Nuggets and the Oklahoma City Thunder respectively, while coping with the blow of Anthony Randolph suffering an Achilles tendon rupture in December.

They had the top seed at the end of the regular season but were unable to overcome their issues and match Barca’s strength in the Finals.

The Breogán knocks down Obradoiro and wins the Galician Cup

Dani Pérez executes Lenovo Tenerife in extra time over the …

Valencia show off their Albufera in the new jerseys