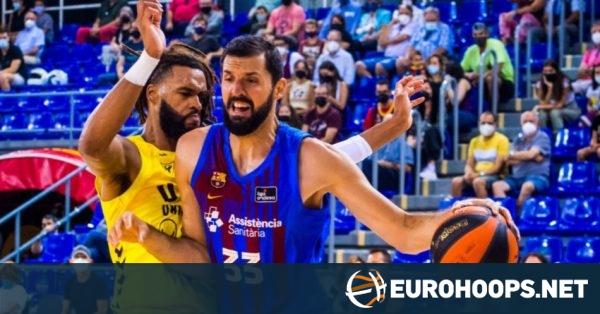 Reigning Spanish ACB champion Barcelona beat UCAM Murcia 85 – 78 in its first game for the 2021-22 season of the league.

The trio of Nikola Mirotic (18 points, four rebounds), Cory Higgins (18 points, four assists) and Brandon Davies (17 points) led Barca towards the win by scoring for 20 out of their team’s 27 points in the last and decisive quarter. Rolands Smits added 10 points, including six via two 3-pointers in the final period.

Isaiah Taylor dropped 18 points, Augusto Lima had 15 points plus eight rebounds and Thad McFadden finished with 14 points for Murcia that outscored Barcelona 16 – 30 in the third period and was up 58 – 61 early in the fourth.

Barca reacted with a 11-2 run and Davies made it 69 – 63 with 5:45 to play. Murcia quickly cut the deficit to one and then Davies, Higgins, Smits and Mirotic combined for a 9 – 1 run that put their team ahead 78 – 71 with 2:41 remaining. Murcia never approached more than three points for the rest of the match.

The post Barcelona begins ACB season with win over Murcia appeared first on .