FC Barcelona has locked up one of the key pieces of its backcourt and one of the most successful perimeter players in the Turkish Airlines EuroLeague by signing two-time champion Cory Higgins to a contract extension that will keep him in the club through the 2023-24 season, the club announced on Monday. Higgins (1.95 meters, 32 years old) has spent the last two seasons with Barcelona and was the team’s second-best scorer in each of those. Last season he averaged 13.1 points, 2.4 assists, 2.2 rebounds and 1.1 steals. In the Final Four semifinal against AX Armani Exchange Milan in Cologne, Higgins also created arguably the season’s most consequential play, when he took a defensive rebound the length of the floor and nailed a game-winning jump shot with 0.8 seconds to go, sending Barcelona to the title game.

Prior to arriving at Barcelona, Higgins spent four seasons with CSKA Moscow where he helped the team win two EuroLeague titles, in 2016 and 2019. Since arriving to the EuroLeague in 2015, no player has spent more minutes on the floor at Final Fours than his 259. He is second in total Final Four scoring (129 points) and third in performance index rating (121), as well. Higgins ranks fourth in total points scored in the EuroLeague, with 2,357, over his six seasons in the competition.

Higgins began his European career with Triumph Lyubertsy in Russia and also played for Gaziantep in Turkey before joining CSKA in 2015. Earlier in his career, he played for Charlotte in the NBA and Erie in the D-League. 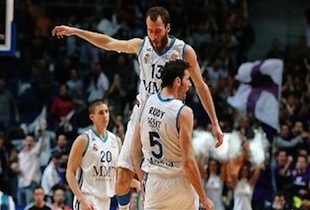 Game of the Week: Fenerbahce, Milan and a date with destiny