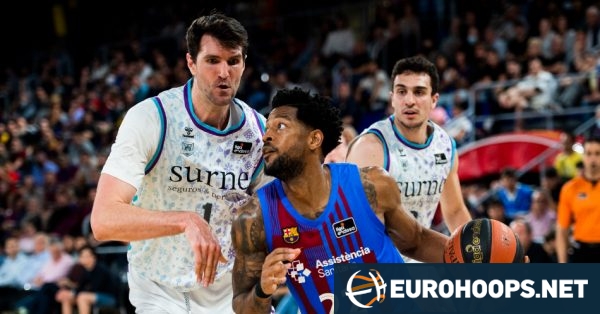 The more the Final Four approaches, the better Barcelona starts to play it seems. The Blaugrana defeated Bilbao 84 – 62 for the Spanish ACB and improved their league-best record to 26 – 7, a few days after what Sarunas Jasikevicius described as a disappointing performance vs. Cafe Breogan.

Nikola Mirotic produced 18 points and six rebounds in 22 minutes for Barcelona that got 14 offensive rebounds as opportunities to make up for its poor shooting percentage (44 percent from the field). Rokas Jokubaitis delivered 12 points while Nicolas Laprovittola scored 10.

Angel Delgado (18 points) and Drew Goudelock (11 points) scored in double figures for a Bilbao that was truly competitive only in the first quarter. Barcelona raised the level in the second period to get a 43 – 35 lead and dominated the third quarter 30 – 15 to establish a wide margin.

Brizuela: “Ibon Navarro’s ideas are coming to us very …

The Rudy thing is left in a scare: slight knee sprain

Burgos leaves the relegation places and puts the permanence …

Barcelona’s firepower no match for Andorra