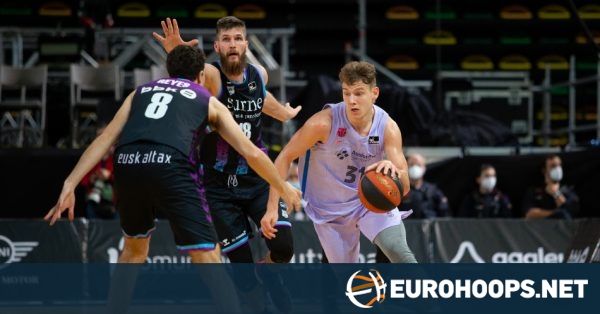 Guerschon Yabusele combined the team-high 15 points with seven rebounds. The French connection extended to Vincent Poirier and his 14 points. Bruno Fitipaldo shaping a game-high 24 points and connecting seven three-pointers fell short for the visitors. Tenerife came within two points early in the final quarter, but Madrid reestablished a double-digit and held on to up its ACB record to 4-0.

Recent New York Knicks acquisition via the 2021 NBA draft, Rokas Jokubaitis starred in the 84-68 victory for FC Barcelona over Bilbao. The 20-year-old Lithuanian point guard poured 22 points, a game-high. Nikola Mirotic added 14 points. Cory Higgins was out along with injured Alex Abrines but the Catalonia powerhouse also went up to 4-0.

Baskonia dropped to 2-2 after losing, 74-67, at Baxi Manresa in another Regular Season Round 4 contest. Finnish Elias Valtonen had 16 points and Chima Moneke logged a 15-point, 10-rebound double-double for the hosts jumping to 2-2. Rokas Giedraitis registered a team-high 15 points for the Turkish Airlines EuroLeague outlet.

Also, Bosnian star Dzanan Musa scored a game-high 23 points behind 8/11 field goals powering Rio Breogan over Coosur Real Betis, 97-65. His side improved to 3-1. Gran Canaria also went up to 3-1 after the 84-71 victory against Joventut Badalona.

Valuable victory for Movistar Estudiantes in extra time in c …

The Endesa League enters ‘The Squid Game’, who will be …

Meindl saves Fuenlabrada from the reaction of UCAM Murcia