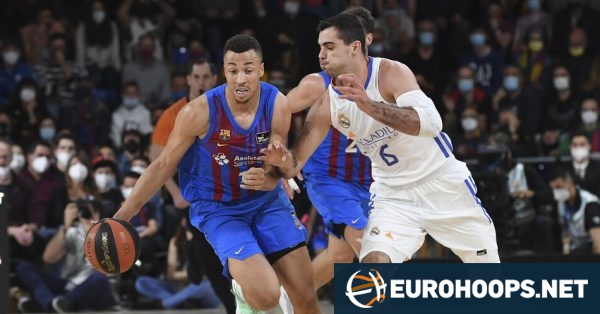 Nicolas Laprovittola scored 20 points as Barcelona defeated Real Madrid 108 – 97 in overtime after one of the most intense and dramatic Classico battles in recent years. This win cemented Barca’s hold on the top spot in the ACB standings since the Blaugrana are now 22-5 while their archrivals dropped to 19-8.

Nigel Hayes-Davis emerged as a decisive factor in overtime for Barcelona, after misfiring in his game-winning attempt in the last seconds of regulation. The American forward drained the go-ahead 3-pointer and dropped five more out of his 16 points in the extra period, including the dagger for the 105 – 97.

Dante Exum put the exclamation mark with a dunk for the 107 – 97 with 40 seconds to play to close the game with 16 points as well. Rolands Smits finished with 18 points for Barca.

Despite several problems, including Nigel Williams-Goss and Rudy Fernandez sitting the game out, Real came very close to leaving Palau with a win when Sergio Llull put them up 88 – 89 with five seconds to play. While Davis took and missed the shot to win the game, Vincent Poirier and Sertac Sanli had their arms locked in anticipation of the rebound with the latter winning the foul and going 1-2 from the line to tie the score. Llull took a long three but was off target and the game went to overtime.

Barcelona’s Nikola Mirotic and Real’s Alberto Abalde were ejected with five minutes left in the fourth period after getting into a quarrel and the two teams remained close until the finale.