Baskonia to donate proceeds from game tickets to Ukraine ref… 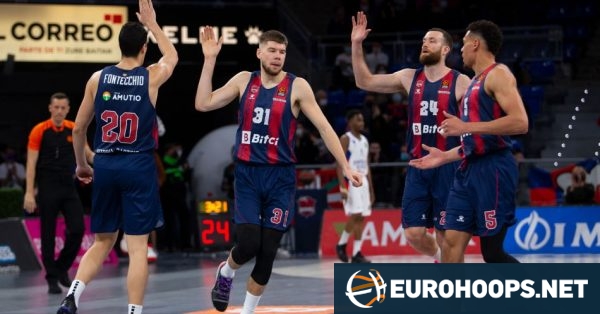 All proceeds from the tickets of an approaching ACB Regular Season home game will go to refugees from Ukraine via humanitarian organization for children Save the Children, Bitci Baskonia announced Thursday extending its support to the victims of the ongoing war following Russia’s invasion of Ukraine.

The team based in Vitoria-Gasteiz will donate the total amount of money paid by fans to attend the ACB Regular Season Round 25 contest opposite Rio Breogan scheduled to be held on March 20, at Fernando Buesa Arena. The ticket prices will be lowered to achieve the maximum gate money.

In a similar fashion, co-owned Deportivo Alaves located in Vitoria-Gasteiz and currently competing in Spain’s top-flight football division, La Liga, will reserve proceeds of the Round 29 fixture versus Granada, scheduled to take place on March 19.

“After Russia’s invasion of Ukraine, the humanitarian crisis grows every day,” noted Baskonia Alaves Group CEO Haritz Kerejeta, “On our part, we are concerned and must help in every way we can. All wars are unfair. Our group aims to promote the solidarity values of sport and stand with the victims of an incomprehensible conflict in the 21st century.”

“The most important in these two days is that the fans of Alaves and Baskonia, and more fans, show their solidarity with the innocent suffering the horrors of war,” he added, “The world of sports must address these events and use its exposure in favor of uniting people and promoting a fairer and more supportive society.”

The post Baskonia to donate proceeds from game tickets to Ukraine refugees appeared first on .

Ibon Navarro is already the new coach of Unicaja