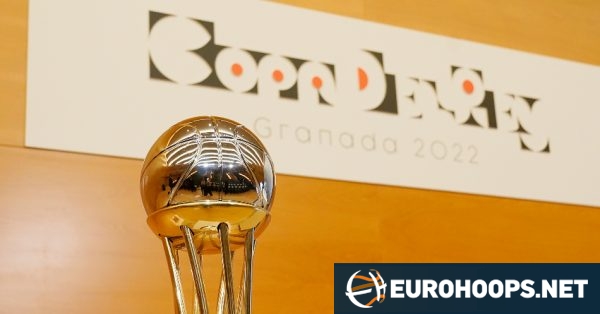 The draw for the 2022 edition of the Copa del Rey was held Monday.

ACB standings leader Real Madrid got Rio Breogan with Joventut and Lenovo Tenerife landing on the same side of the bracket.

Last year’s winner FC Barcelona highlights the opposite end receiving Baxi Manresa as the Quarterfinals opponent. Valencia and UCAM Murcia will also face each other for a spot in the Semifinals.

The top eight teams at the end of the first half of the 2021-22 ACB Regular Season qualified to the Copa del Rey. Madrid and Barca along with Valencia and Joventut were seeded for the draw as the top four teams of the standings.

The team based in Madrid has captured 28 titles with archrival Barcelona following with 26 titles. All Spanish Cups since 2010 have been shared between the ACB and Turkish Airlines EuroLeague powerhouses.

Sitting third on the list with the most titles, Joventut is the winner of eight Cups through team history with the last title dating back to 2008. Among the remaining participants of the 2022 edition, Manresa and Valencia lifted the trophy back in 1996 and 1998, respectively.