Both the cooperative and the club will donate money to collaborate with their research.

Coviran and the CB Granada Foundation have taken another step forward in their corporate social responsibility. The headquarters of the cooperative has been the setting chosen precisely today, February 4 and the International Day of the fight against Cancer, for the presentation of a new kit that will be worn by the team led by Pablo Pin and in which the color pink predominates, although you can also see a circle made up of colored ribbons alluding to all types of cancer.

The event was chaired by the CEO of Coviran, José Francisco Muñoz, the president of the Spanish Association Against Cancer in Granada, Javier García, and the president of the CB Granada Foundation, Óscar Fernández-Arenas. In addition, the entire Nasrid staff has attended along with the coaching staff and the entire board of directors, as well as Coviran employees.

Both Coviran and the CB Granada Foundation join the collaboration in the fight against cancer. The Virgen de las Angustias Cooperative will donate one euro for its investigation for each point that the red and black group adds. For its part, the entity chaired by Óscar Fernández-Arenas will donate a percentage of the proceeds from the sale of the shirts, which are now available through the club’s website for a price of 35 euros. They can be reserved until March 16 and will be delivered from April 15.

Coviran Granada will debut its new kit on February 13 at the CB Almansa track with Afanion in the clash corresponding to the sixteenth day of competition in LEB Oro.

Statements by the General Director of Coviran, José Francisco Muñoz: “We are proud to collaborate through sport, one of the best showcases there is, in this case the CB Granada Foundation, the club we have sponsored for more than ten years, to fight against cancer. Covirán is going to donate during 2022 one euro for each point that the red and black team adds for the investigation of this disease. We doubly encourage the team, its successes this year will be double, Coviran’s contribution is added to the sporting ones with each goal scored”.

Statements by the president of the CB Granada Foundation, Óscar Fernández-Arenas: “We thank Coviran for the magnificent idea he had. We are at his disposal for any initiative that he proposes to us and even more so if it is to collaborate in this way”.

Lastly, the president of the Spanish Association Against Cancer in Granada, Javier García, thanked both organizations for their contribution in the fight against cancer and for helping to raise awareness of the importance of investing in research to achieve one day eradicate this disease.

James Ellisor is already in Granada 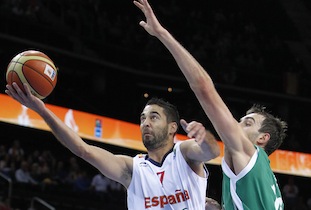