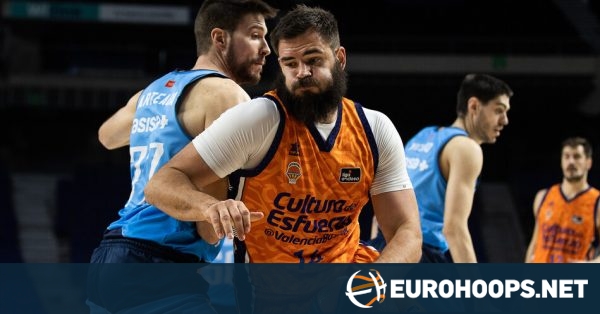 Valencia Basket outlasted Murcia with an 80-66 win on the road to extend its winning streak to four games and keep up their momentum ahead of the upcoming ACB playoffs.

Bojan Dubljevic led all scorers of the game with 26 points, 3 rebounds and 3 assists for Valencia, Joan Sastre had 12 and Martin Hernansson posted 11 points.  Emanuel Cate and Sadiel Rojas each had 12 points for the hosts.

Just four rounds remain to play in the ACB and Real Madrid, Barcelona, Tenerife, Baskonia and Valencia have sealed their tickets to the playoffs while Burgos (20-13), Joventut Badalona (18-14) and Manresa (15-18) remain actively on the chase.

Fuenla wins a final due to relegation and Burgos goes to…

A triple by Frankamp raises Murcia and silences Obradoiro …

A great Yabusele exhibits his doll and Real Madrid maintains the …