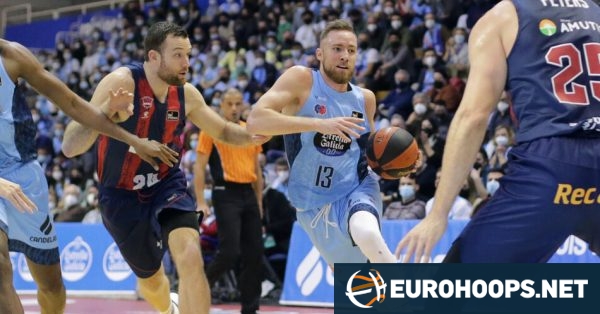 Following the ACB Regular Season Round 19 game versus Baxi Manresa, Dzanan Musa was transferred to HULA hospital in Lugo to have surgery on his neck, as announced by Rio Breogan and confirmed by the player himself via a post on Twitter Thursday evening.

Musa, 22, will presumably miss the rest of the 2021-22 campaign, considering the ACB Regular Season schedule contains six more games for his side, stretching over the next four weeks. The team based in Lugo sitting at 14-14 is currently one game outside the Playoffs zone of the Spanish League, so extending the season past mid-May is a possibility.

The Bosnian forward, carrying the experience of 54 NBA games as a member of the Brooklyn Nets, has been firing on all cylinders since moving his talents to Spain. Averaging 20.0 points, 5.1 rebounds, 3.1 assists, 1.1 steals, and 0.3 blocks per contest in the strongest domestic league of Europe elevated his team to the top half of the standings and nearing the first Playoffs berth since 1984.

At the international level, Bosnia-Herzegovina is part of Group B of the 2022 EuroBasket. The national team of his country will take on Hungary, Germany, Slovenia, France, and Lithuania in early September looking to earn the opportunity to move from the preliminary stage in Cologne to the knockout stage in Berlin, Germany. One month earlier, a couple of fixtures opposite the Czech Republic and Bulgaria shape a potential path to the next round of the 2023 FIBA World Cup Qualifiers.

Huertas leads the triumph of Lenovo Tenerife with Joventu…