The Brazilian pivot has completed a successful career at Perfumerías Avenida, where she has won eight league titles and eight Queen’s Cups. The player earned a WNBA ring in 2002.

The Hozono Global group and the Jairis Basketball Club will continue to walk together during the 2021/2022 season. After a year as the main sponsor of the men’s team that played in LEB Plata, the company specialized in public services, infrastructure, health and the environment strengthens its collaboration with the club, now adding the sponsorship of the women’s team. Both teams will play under the name ‘Hozono Global Jairis’, in the Women’s Challenge League and the EBA League respectively.

This has been confirmed by the president of the Hozono Global group, Manuel Martínez, and the president of CB Jairis, Salvador Costa, in a press conference that was also attended by the mayor of Alcantarilla, Joaquín Buendía, and also served to announce the signing of Erika de Souza. The player, international with Brazil, has been champion of the WNBA, the Euroleague, the Spanish league and has participated in three Olympic Games

“Today is an important day for our club. The sponsorship of our senior teams by the Hozono Global group is a great boost for our project and allows us to face a difficult season with guarantees “, Costa has indicated.

For his part, Manuel Martínez, has indicated that for Hozono Global “It is a pride” to be part of the Jairis family “, reinforcing the collaboration started last season. “CB Jairis is a historic club for sports in our Region so, on behalf of the more than 4,000 people who make up Hozono Global, I want to say that it is a pride to reinforce this support and be part of the Jairis family”, has stood out.

Maximum rebounder and Top 5 in scoring in Spain

Considered one of the best players in the history of her country, Erika de Souza comes to CB Jairis after a long professional career in elite clubs. International with Brazil, he has a long history behind him, notably his participation in three Olympic Games (Athens 2004, London 2012 and Rio 2016). He also played 12 seasons in the WNBA, winning the championship ring in 2002 with the Los Angeles Sparks.

“Thank Hozono Global Jairis for the opportunity to participate in this exciting project. I am looking forward to meeting all the fans at the games. We will have a good time”, the player has indicated.

De Souza (1.97 meters) joins CB Jairis to “Contribute his experience in a position as important as that of pivot”, said the president of the club, Salva Costa. “His incorporation is great news for us since it means the arrival of a first-rate player to our team, showing that the objective is for Murcian women’s basketball to reach the highest category at the national level in the short term”, has highlighted the president of CB Jairis.

? A player with an impressive track record and record. 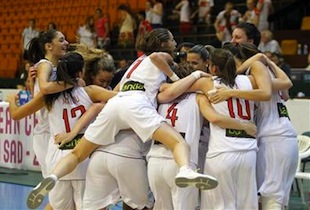 Tenerife takes over the services of Zofia Hruscakova