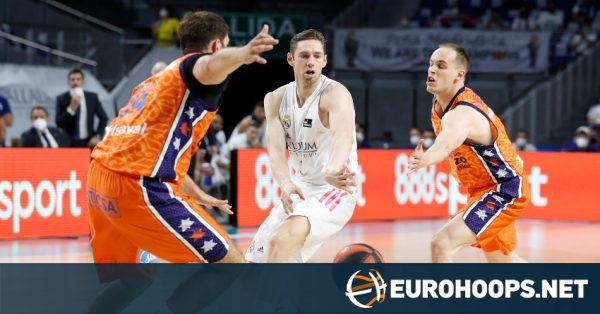 Fabien Causeur and Walter Tavares took over completely against Valencia Basket in Game 1 of the Spanish League semifinals and handed the Whites an 81-70 home win.

The return of fans to the stands seemed to give a proper boost to Real Madrid players, especially so to Causeur who banked in 24 points on 5-9 from deep. Tavares logged a double-double with 17 points and 11 rebounds while Jeffrey Taylor added 13 points.

For Valencia, Louis Labeyrie and martin Hermannsson scored 11 each while Bojan Dubljevic helped with ten points, as the guests struggled to score after the halftime rest.

Both sides put on steel defense in the third quarter but Madridistas did it better and also had a solid six-point gap secured earlier. Winning the third period 14-8 was crucial together with an 11-2 run in the fourth quarter (71-54) which sealed the deal.

The post Fabien Causeur and Walter Tavares lead Real Madrid to 1-0 against Valencia appeared first on .

Diagne elevates a MoraBanc Andorra that breaks its bad streak…

Baskonia beats Burgos and continues to dream of the Copa del …