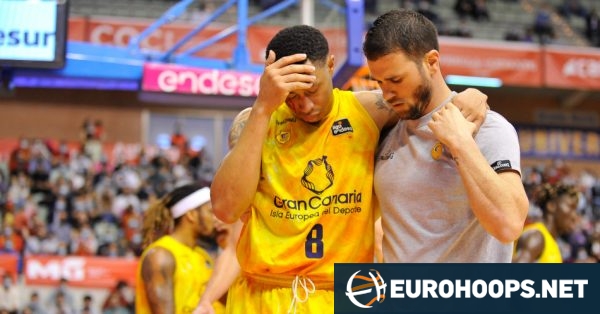 Gran Canaria has taken legal action against UCAM Murcia guard/forward Sadiel Rojas by filing a complaint before the Liga Endesa Disciplinary Judge, in regards to his “violent and unsportsmanlike behavior” towards shooting guard AJ Slaughter.

Rojas fell on Slaughter with his elbow in the third quarter of Gran Canaria’s Sunday ACB game in Murcia, and although the latter returned to the game for the fourth quarter, he was ruled out of Monday’s practice due to experiencing pain in his neck and head, per GranCa’s statement. Further neurological tests will be conducted to determine the severity of the injury.

Following the game, Slaughter posted a screenshot of the incident on his Instagram account, commenting the following: “After watching the replay and knowing the reputation of this player I’m pissed off that wasn’t an ejection!”.

“Given the incident suffered by our player AJ Slaughter in the match last Sunday, April 10, 2022 at the Palacio de los Deportes de Murcia on gameday 28 of the regular season of the Endesa League, CB Gran Canaria has presented complaint before the Competition Judge of the ACB League against player Mr. Sadiel Rojas for his violent and unsportsmanlike behavior, urging said body to instruct the corresponding sanctioning file against the indicated player in the terms provided in the Disciplinary Regulations of the FEB”.

UCAM returns to the Playoffs after crushing Obradoiro