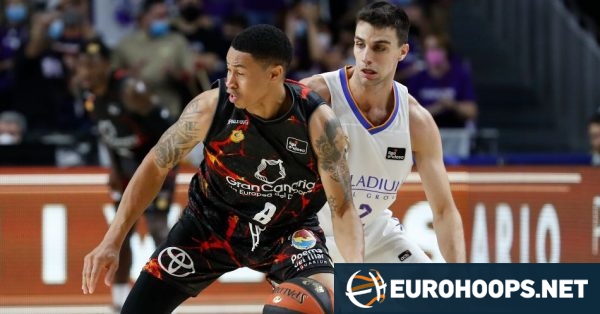 A.J. Slaughter scored the go-ahead 3-pointer with 47 seconds to play as Gran Canaria beat Real Madrid 70 – 75 on the road to hand the Blancos their first loss of the season in Spain.

Real Madrid was undefeated for eight games in total in domestic competitions: Six in the ACB League and two in the SuperCup. Until Gran Canaria happened.

Both teams missed opportunities to either tie the game (Real Madrid) or get a safer lead (Gran Canaria) in a quite long last minute. Slaughter hit the basket for the 69 – 72 to end a 10 – 0 run by Real Madrid and then Carlos Alocen was off in wide-open three for the hosts. Following an offensive rebound, Edy Tavares went 1-2 from the free-throw line.

On the other end, Artem Pustovyii didn’t connect from the charity stripe, but Nicolas Brussino grabbed the offensive rebound and Slaughter made one of his two free throws. Alberto Abalde misfired from beyond the arc and then an unsportsmanlike foul by Guerschon Yabusele sealed Gran Canaria’s win.

Pustovyii led Gran Canaria overall with 14 points. Dylan Ennis scored 13 and Albicy had 12 points and seven assists for the team from Las Palmas that led 59 – 69 with five minutes to play.

After missing the EuroLeague game vs. Fenerbahce to attend his wife giving birth, Tavares returned to action with 18 points and 13 rebounds. Abalde had 12 for Real that was missing guard Nigel Williams-Goss.

The post Gran Canaria “Slaughters” Real Madrid on the road appeared first on .