J.20: The growth of Leyma Coruña goes through the visit of the

J.20: The growth of Leyma Coruña goes through the visit of the solid leader Covirán Granada

The solid Covirán Granada will get on the bus this Sunday with the aim of being able to become strong in the leadership and will do so to visit one of the most complicated courts in the category, that of a Leyma Coruña in the process of growth and that will have a unique opportunity when it comes to gaining confidence. Undoubtedly the most outstanding duel of a weekend in which Movistar Estudiantes will not come into play and in which Bàsquet Girona will seek to become strong against TAU ??Castelló with the same objective.

With seven games at stake, Day 20 could be really valuable for its protagonists in case of victory. Especially for those teams that have managed to reap two wins in the two days played in recent days and who will be able to opt for a plenary session with which to take a notable step forward at the qualifying level.

REPORTAGE: Juani Marcos and the poetic justice of that bureaucratic procedure

REPORTAGE: Marc Peñarroya and the talent of an heir with his own history

Just 48-72 hours have passed since the LEB Oro League closed its Day 19 and the competition is already preparing to return to the courts. Because Day 20 will begin on Saturday night with a duel in style at the Municipal de Palencia. There, the local fans will support their EasyCharger Palencia to fight for victory against CB Almansa with Afanion ready to continue surprising. A duel to which the Palencians do not arrive at their best moment after four consecutive defeats after the covid outbreak suffered by their squad, but with the only desire to be able to find a turning point with which to recover their upward trajectory. To do this, they must beat a CB Almansa Afanion at a totally opposite moment after having opted in their favor 5 of the last 6 games.

Already on Sunday morning, two games will focus the attention of a morning with much at stake. Especially in the Autonomous City where Melilla Sport Capital will have the always difficult challenge of beating an HLA Alicante led by its former coach Gonzalo García de Vitoria and who will arrive after having starred in a great match against an ICG Força Lleida who, in his case, will return to the Espai Fruita Barris Nord to receive the giant killer Juaristi ISB.

The afternoon session will start from San Sebastián where Acunsa Gipuzkoa and UEMC Real Valladolid will fight each other in a duel of needs that will provide qualifying oxygen to whoever manages to prevail on the parquet. Immediately afterwards, Bàsquet Girona will return to Fontajau to play a complicated match against a growing TAU Castelló with whom they share ambitions for the second round of competition. Although the great meeting will come from Riazor with the visit of the leader, a Covirán Granada willing to continue his work against a demanding rival, a Leyma Coruña willing to go further to continue growing in the table. Finally, Levitec Huesca will continue looking for triumphs in favor of permanence against a Cáceres P. Humanity very close to the objective after the last triumphs harvested in their fiefdom. 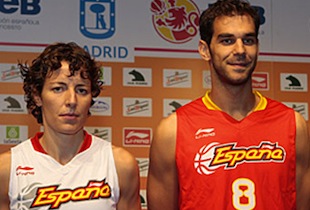