Matchday 29 of the LF Endesa played its inaugural match this Tuesday, which ended in victory for Spar Girona against a BAXI Ferrol that arrived after having certified its relegation to the LF Challenge last weekend.

It was not an easy challenge, but Tenerife got down to work against Valencia BC. Intensity from the first play and a suffocating defense against a team that had less at stake. Teresa Pleisance is the most dominant player in this final stretch and one of the causes of a victory that could be worth a stay (24 points and 16 rebounds). Because Embutidos Pajariel Bembibre could not face a Casademont Zaragoza in a state of grace. After defeating Spar Girona, the confidence of players like Vega Gimeno or Merrit Hempe is very high. Pepe Vázquez’s men pressed in the third quarter, but did not reach an even finish. With these results, the Bercians need victory on the last day and wait for Tenerife to stumble.

The other involved in relegation, Innova-tsn Leganés, could not beat Lointek Gernika, although the defeat of one of their pursuers leaves them in a calm situation with the average won by both. Of course, the day was very good for the Biscayans, who have one foot in the playoffs, eliminating one of their rivals, a Kutxabank Araski who could not win in Mendizorroza against a very successful Durán Maquinaria Ensino from the line of 6.75 (14 of 30 in triples).

Spar Gran Canaria still has playoff options after beating IDK Euskotren with a graceful Sokhna Fall, winning the fight against Mariam Coulibaly. The one that did not fail after their participation in the Final Four of the Euroleague is Perfumerías Avenida, who played a very serious game in La Seu d’Urgell and brought back a spectacular Katie Lou Samuelson for the cause.

In Logroño, Campus Promete said goodbye to its fans with a very meritorious victory against Movistar Estudiantes, a playoff team. Aina Ayuso was splendid in the first half without having to shoot much at the basket, while Nogic and Kovacevic executed from the triple.

Spar Girona complied with the script initially planned for a match in which Alfred Julbe’s players knew how to control the pace of the game from the initial jump. A key Laia Palau was in charge of it so that his team could reap a 10-point lead relatively quickly, which was the one that ended up marking the match. Because each and every one of Baxi Ferrol’s attempts to reduce differences found a response from Girona through its multiple offensive options. A duel in which all the local players had been able to score already in the first quarter and in which the moments of shared leadership between Laia Flores and Laia Palau were too much for Lino López. Thus, the last quarter became a mere formality in which María Araujo shone with her own light to stand out in scoring and keep her team in the fight for second place (58-47). 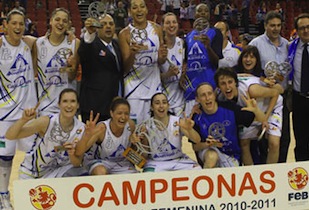