Kalinic pushed Valencia over Baskonia in the ACB semifinals 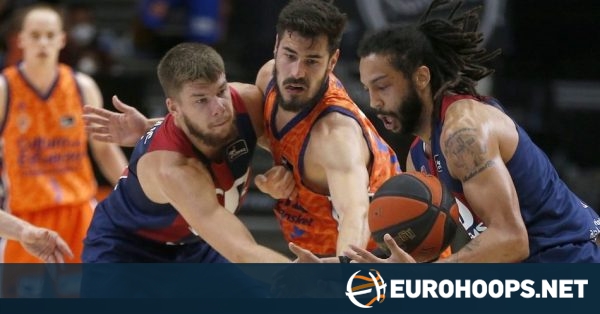 Valencia played with fire but ultimately wasn’t burned. Thanks to 18 points, seven rebounds and several key plays down the stretch by Nikola Kalinic, Valencia got the 78-74 win (2-1) over Baskonia and qualified to the Liga Endesa semifinals against Real Madrid.

After trailing even by 12 points, Baskonia twice cut the lead to two (75-72) in the last seconds of the game, however Kalinic was always present to save the day, having three steals and missing just one three in the game and one free throw.

Mike Tobey added 13 points and also Louis Labeyrie in his 100th Spanish League game with 12 points, made this happen for the winning side.

For Baskonia, Zoran Dragic was the top scorer with 16 points, Achille Polonara added 15 and Alec Peters who made an amazing buzzer beater at the end of the third period had 12 points.

However in the end, nobody could complete the comeback of Baskonia with Rokas Giedraitis having the change the give to his team the lead with 49 seconds left, but missing the most crucial three of the game.

The post Kalinic pushed Valencia over Baskonia in the ACB semifinals appeared first on .

The Breogán River is milk: from recently promoted to emerging …

MoraBanc expels mistrust and already has its first victory …

Mirotic: “Coming to Barcelona cost me friends, more than …