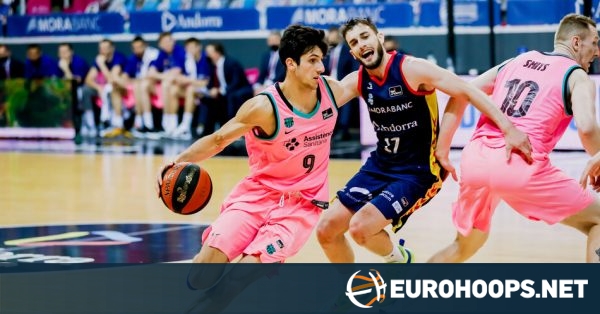 Leandro Bolmaro caught fire against MoraBanc Andorra as he led Barcelona to a 79-63 road win in the Spanish Liga Endesa.

The 20-year-old points guard, who was picked up in the 2020 NBA Draft as the 23rd overall pick, shot 9-11 from the field on his way to career-high 26 points including 4-5 from the three-point territory.

Pau Gasol followed with 16 points and eight rebounds in 22 minutes, his best performance since returning from the long pause due to injury as his playing time and contribution keep increasing gradually.

On the opposing side, Clevin Hannah logged 18 points and six assists in addition to Oriol Pauli’s 13 points.

The Madrid rivals secured their 31st win and the best start in league history prevailing, 90-76, over Fuenlabrada. Jaycee Carroll recorded a game-high 20 points behind 8/14 field goals. Rudy Fernandez and Vincent Poirier put up 13 points each.

The post Leandro Bolmaro banks in career-high 26 points in Barca’s win over Andorra appeared first on .

Baskonia redeems itself and exacerbates the Madrid crisis

Real Madrid remains intractable in the Endesa League and conquered …