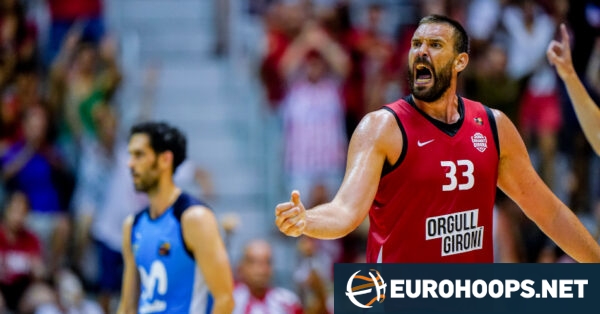 According to the rulebook of Spain’s ACB, a registered player can’t be registered as the president as well. That creates an issue for Marc Gasol.

Gasol, 37, officially returned to the team he founded last November. Committing to offer his services on the court until the end of the 2021-22 season, he helped Girona earn a promotion from LEB Oro to the top-flight Liga Endesa also known as Liga ACB. He was expected and is still expected to compete as a player next season as well. But the aforementioned regulation is in the way.

FC Barcelona recently renouncing ACB rights on the experienced big man was the first step and the second step will be a way around the rule prohibiting a person holding a front-office position from actually playing for the team. It is clear that all involved parties wish to watch Gasol suit up for Girona in the 2022-23 season. Being temporarily removed from the position of the president is the most likely solution.

The Catalan star last played in the top division of Spain back in 2008, as a member of CB Girona, the previous club representing the city in the ACB. In 2014, he founded Basquet Girona and this season stepped in as a player to assist in completing the drive from LEB Plata and LEB Oro to the ACB.

As for 2022-23, the first pieces have been placed on the roster. Backed by the experience of new head coach Aito Garcia Reneses, the list of incoming players extends to Quino Colom, Pol Figueras, Patricio Garino, Roko Prkacin, and Kameron Taylor. Also, Jaume Sorolla was retained from last season’s squad.

The post Marc Gasol is expected to play in ACB but must overcome a hurdle appeared first on .