Nacho Arbués and Alex Labad will continue to command the LBC

Once the season is over, LogroBasket begins the announcements of renewals and signings of the squad for 2022/2023, a squad that has been in the making for months and that will gradually see the light.

As always, the first stone of the Logroño project is the coaching staff. Once again, the red and white club bets on home coaches who know the team and the club well.

Nacho Arbués and Alex Labad repeat at the helm of an LBC Cocinas.com that hopes to change the bittersweet sensations of last season, after a course in which complications completely marked the functioning of the team.

Once again, the team will renew the strong group of the squad, made up of home players, and will have signings that try to raise the level.

Coach Nacho Arbués has been linked to the club since its creation, his first experience in the LogroBasket was with Junior, which he took to the Spanish Championship and since then he has always managed the red and white first team, going through the Second National, First National and finally the EBA League, achieving two key promotions for the entity and that allow it to be in the EBA today.

Nacho Arbues: “At the end of the season I had many doubts as to whether I was the best coach for this team, but I had no doubt that it was the only team I would consider coaching next season. From the club they have always shown me their confidence and conveyed their enthusiasm “I want to show that I am the right person to take on this challenge. We have been working on the team for months and I sincerely believe that the red and white family will be excited when they begin to learn about the renewals and signings. All those who suffered this year, They’re going to enjoy it a lot. You have my word.”

Preview CJ.5: The last ticket to the Final Four, at stake in 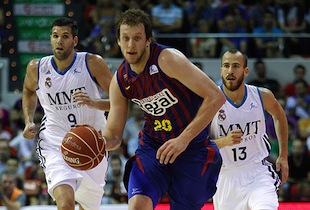 Postponed: Covirán Granada asks for take-off runway to the