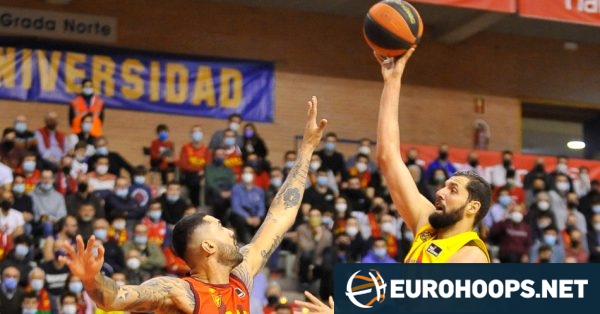 Nikola Mirotic spoke game for FC Barcelona that outlasted Murcia 89-87 on the road to improve to a 20-5 record in the Liga Endesa.

Mirotic scored a season-high performance with 30points, 9 rebounds for a PIR of 39 and left no room for Murcia to deliver the upset.

Despite missing Brandon Davies due to a shoulder injury, Sarunas Jasikevicius’ team overcame a bumpy start (27-16 after 10′) and outlasted the pressure to bounce back after a defeat to Joventut on Sunday. Nicolas Laprovittola and Dante Exum both added 17 points for Barca and youngster James Nnaji had 8 points and 2 rebounds in 12 minutes on the court.

Isaiah Taylor led the hosts with 25 points, Jordan Davis had 19 points and James Webb tapped 13 points. Murcia suffered its second defeat in a row to drop to 13-12, yet remains in the playoffs picture.

Lenovo Tenerife survived a tough contest against Coosur Betis with a 99-97 victory in overtime to bounce back and move up the standings with a 15-9 record.

Bottom-seeded Betis fought for its life though they caved in during the final seconds of the extra five-minute period to fall to a 6-19 record. Shannon Evans had a team-best double-double of 21 points and 15 assists, Dairis Bertans picked up 20 points and Beqa Burjanadze scored 18 points.

Abalde, with a muscle injury, new loss at Real Madri …