Nikola Mirotic: “The season, in the end, has been a failure” 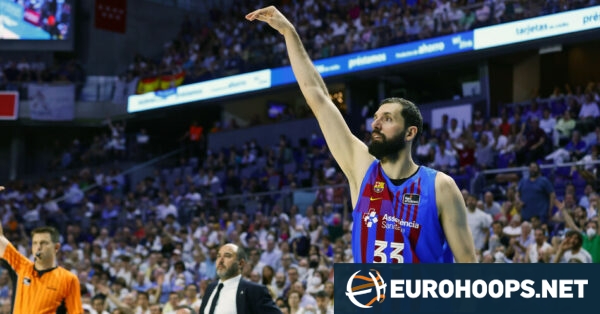 Nikola Mirotic was Barcelona’s reference point against Real Madrid and his display in Game 2 of the finals helped his team win their only game in the series. However, the team performed below the expected level and ended the season with only the Copa del Rey trophy, far from the aspirations that were set at the beginning of the 2021-22 campaign.

“In my opinion, the season, in the end, has been a failure,” Mirotic said at the post-game press conference Sunday. “This team was aiming for much more, it could do much more. The objectives have not been achieved. It’s not a failure because we didn’t want to or because we haven’t given it our all, but because we are Barcelona. We are expected to win more titles. The last two months, for some reason, the team has been going down a bit and, when we had to give the most. That is the reality”.

“We try to play the system that is asked of us,” Mirotic added. “With mistakes, obviously, we are human. But we always try to play the game that our coach asks of us. There are many mistakes on our part. I think they have been very good defensively. They knew very well some strong points in which we felt comfortable and they have taken them away from us. It’s hard to talk about details. The reality is that Madrid has won and we are going home with one less title”.

Real Madrid lifted the ACB trophy Sunday after winning the series 3-1, and now Barcelona has to consider its options for next season. Adding up to the heavy impact of losing the finals, reports surfaced Monday stating that Nick Calathes wants out of the final year of his contract with Barca.

The post Nikola Mirotic: “The season, in the end, has been a failure” appeared first on .