Nikola Mirotic’s message for elimination Game 4: We have to … 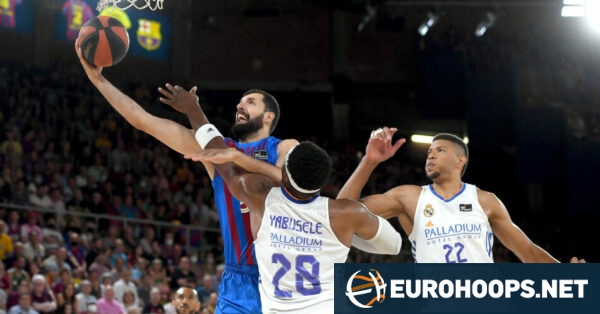 Barcelona star forward Nikola Mirotic mentioned that he and his teammates are aware of what they need to correct in order to turn around their 2-1 deficit against Real Madrid in the Spanish ACB League Finals but that’s different from actually putting that knowledge into action.

“We are aware of the mistakes we have made and we know how to deal with them, but it is one thing to talk about it and another to show it [on the floor],” Mirotic said per Spanish news agency EFE.

Mirotic’s Barcelona lost Game 1 at home and then survived Game 2 thanks to two free throws by Cory Higgins in the last minute. Real Madrid took the advantage with a win in Wiznick Center and can finish the job Sunday (19/6).

“They deserved the two games they won,” Mirotic, a former Real player, said. “In the second game we played very well and that should be the way to follow. We have to be more physical, more consistent and play better. With these plus more energy and more speed on our offense, we can have more options for victory.”

Regarding what his team needs in order to stay fresher and thus put more energy on the court, Mirotic said that,” It’s a matter for the coach but those of us who come out have to compete to the death. The downturns have cost us a lot. We can win by being more consistent and tougher. They are playing great basketball but we must think about us.”

The post Nikola Mirotic’s message for elimination Game 4: We have to compete to the death appeared first on .

Burgos undoes Joventut and comes out of the well