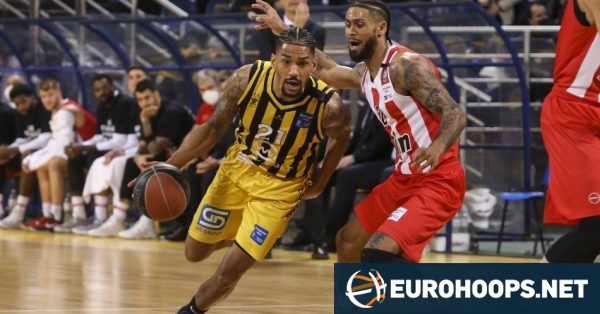 Olivier Hanlan has a deal with Spanish outfit Valencia, according to sources. His previous team, Aris will receive a buyout.

Hanlan, 29, was going through his third campaign in Greece’s Stoiximan Basket League. Staying in Thessaloniki, he joined Aris in August following a couple of years at Iraklis.

The Canadian guard, a product of Boston College, has logged 20.9 points, 3.5 rebounds, and 2.9 assists per contest over 15 appearances in the Greek League this season. He was coming off 13.6 points and 16.3 points per game in the 2020-21 and 2019-20 editions of Stoiximan Basket League, respectively.

Back in the 2015-16 season, Hanlan displayed his talents in the Turkish Airlines EuroLeague recording 24 games played as a member of Lithuania giant Zalgiris Kaunas. Adding to his experience in European club competitions, he went on pilling up 22 appearances in the Basketball Champions League between France’s Le Mans, Germany’s Telekom Baskets Bonn, and Iraklis, plus six in the FIBA Europe Cup.

Landing in Spain’s Valencia, he will not be eligible to compete in the 7DAYS EuroCup but under the guidance of experienced tactician Joan Penarroya will play for the first time in the ACB, widely considered the strongest domestic league of the continent. On a five-game winning streak and at 18-8, his new side is tied with Joventut Badalona sitting behind FC Barcelona’s 21-5 and Real Madrid’s 19-7. Winning 11 out of the 17 games so far in the EuroCup Regular Season is good enough to secure a berth to the next round.

The post Olivier Hanlan moving to Valencia appeared first on .

Manresa triumphant on the road over Real Madrid

Van Rossom, positive for covid, goes down in Valencia