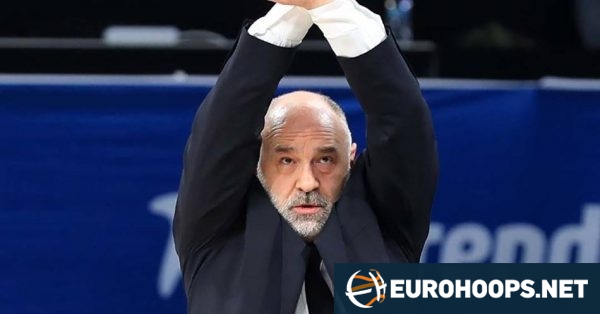 Real Madrid announced that head coach Pablo Laso has been admitted to Sanitas La Moraleja University Hospital after suffering a myocardial infarction (heart attack). According to the official update, Laso has undergone a catheterization this afternoon. He is stable and will spend the night under observation in the intensive care unit.

?he 54-year-old Laso yesterday coached Game 2 of the Spanish League semifinals between his team and Baskonia, which his team won with ease.

Nothing else has been announced about his condition, neither is known if he had a medical history with heart issues.

A two-time EuroLeague champion with Real Madrid, Laso is considered one of the top coaches in Europe. The fact that he remains the coach of Real Madrid for more than a decade since he arrived in the summer of 2011 on the bench, proves this beyond any doubt.

Every club, fellow coaches, and players expressed via social media their wishes for a speedy recovery, including newly crowned VTB United League champion coach Xavi Pascual who said the following: ”I want to express all my support to my friend Pablo Laso in this difficult moment. All my energy and thoughts are with him. Hope He’ll be back soon and will continue to make his job in the best way”.

The post Pablo Laso admitted to hospital after heart attack appeared first on .

The most supportive Endesa League: points for the island of La Palma

Laprovittola: “To win the Euroleague you have to have a desire …

Hanga: “When Madrid called me it was very clear to me. It cost me …