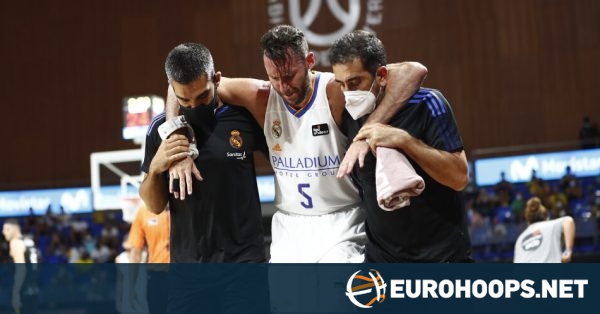 Real Madrid managed to just barely get past Tenerife in the ACB Supercopa, and reach the Final, however, the squad has also lost Rudy Fernandez to injury along the way.

The experienced guard suffered a knee injury while trying to save a ball that was going out of bounds. He was in visible pain and was helped by two members of Real Madrid to leave the court.

The biggest concern among Real Madrid has been that the player didn’t suffer a blow but instead his knee failed him during the movement he tried.

“I am concerned that it was not a blow, but that he felt that his knee had failed him,” coach Pablo Laso said after the game. However, the expert updated the situation today and gave a more optimistic prognosis.

“In principle, Rudy is not going to play. It is not a big blow, a hyperextension of the knee, a sprain. We believe that it is not a serious injury. We will confirm tomorrow, but I prefer to be optimistic and think that it will not be a prolonged absence. We have not done tests yet, they will be done tomorrow morning in Madrid,” he said, per AS.

Real Madrid will face Barcelona in the Final at 18:30 CET.

Dubljevic leads Valencia’s triumph against a MoraBanc An…