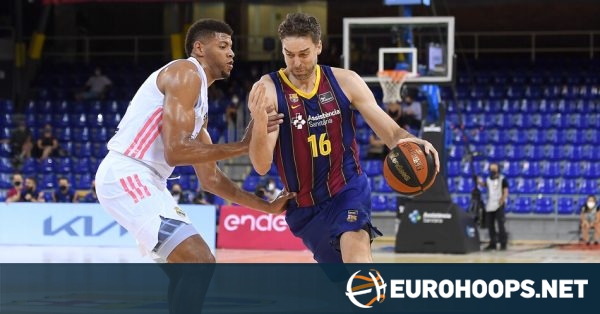 After winning his first Spanish ACB League championship title in 20 years, Pau Gasol didn’t give a certain answer on whether this was his final game with a club.

Gasol had said many times that Game 2 of the Finals vs. Real Madrid could be his “last match in Palau.” Following the match, he didn’t want to shut that door completely.

“Yes, well. I’ve always said it. It may be the last (game in Palau). Ok, we will see. It is time to rest and think about the future,” Gasol said to Movistar TV after the game. “I’m very happy to have been able to play at this level”.

And of course, there are also the upcoming Tokyo Olympics, in which Pau Gasol is expected to play with the Spanish national team. As he said: “We have talked with the federation about the Olympic Games. The federation has always shown its support. These days we have to think about being with the family a bit because they deserve it and then to see what happens with the national team and in the future.”

Barcelona captain Pierre Oriola called Gasol to lift the trophy with him. He also urged Gasol to stay to “win more,” together with Barca star and Finals MVP Nikola Mirotic.

As for Barca coach Sarunas Jasikevicius, he had a similar thought about his one-time teammate and now player.

“I’m sad we couldn’t win the European Trophy for Pau,” Jasikevicius said. “Maybe he will rest a week and change his mind”

The post Pau Gasol leaves door open for one more season: “It’s time to rest and thin? about the future” appeared first on .

Dante Exum, a number 5 in the draft as a solution to the p …