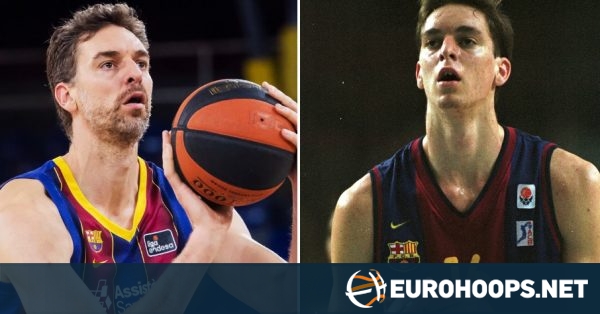 It has been 20 year since Pau Gasol last played in the Spanish ACB League Finals.

In June 2001, a nearly 21-year-old Gasol led Barcelona to the championship title by averaging 17.0 points and 9.0 rebounds through a 3-0 sweep over archrival Real Madrid. The Spanish big man  had 22 points, 10 rebounds and four assists in the away win in Game 3 and earned Finals MVP shortly before beginning his long and super successful NBA journey.

“We won the series 3-0 and we won that game at Raimundo Saporta,” Gasol said while recalling the 2021 series during a video interview for ACB ahead of the Finals that begin Sunday (13/6). “We were playing very well and we took the title on his court. Those are always good memories and we finished the season very well.”

Now, Gasol is looking forward to help Barcelona finish the season in a similar fashion against the same opponent. Winning the Finals will bring the championship back to Blaugrana hands for the first time since 2014 and snap a seven-year drought which has been unprecedented since the team was established as league powerhouse in the early 1980s.

The Finals will be held in best-of-three format for the first time since 1986 due to calendar complications caused by the COVID-19 pandemic, and Gasol emphasized on the importance of Barcelona giving the first blow especially since they lack homecourt advantage and begin the series at Real Madrid.

“Each game is much more important than in a five-game playoff because the first to win two games takes the title. It is important to start well. We started at their house but it would be very important to hit the first shot and win that first game. He has very good players. The interiors, of course. The whole team has a high level, despite the losses. They have shown an enormous character and winning spirit “, said Gasol, also valuing the rival.

Real Madrid is featuring several of Gasol’s Spanish national team longtime teammates such as Sergio Llull, Rudy Fernandez and Felipe Reyes plus a mixture of young guys who have been given an upgraded role by coach Pablo Laso in light of injury problems and departed players (Facu Campazzo, Gabriel Deck).

“They have very good players and a high-level team, which after their losses has shown great character and fighting spirit,” Gasol said. “The Clasicos are always a little more special: the incentive, the rivalry, the history.”

Gasol has been steadily raising the level of his performances since he returned to Barcelona in February to now reach some record-breaking efficiency  heights at 40 years of age.

“For a long time, I have been living my life and my career as if I had already played my last game or the next one was my last one,” Gasol concluded. “I’m very happy with my performance, my physical condition and I’m very excited to keep enjoying it.”

Zaragoza takes air at the expense of Andorra