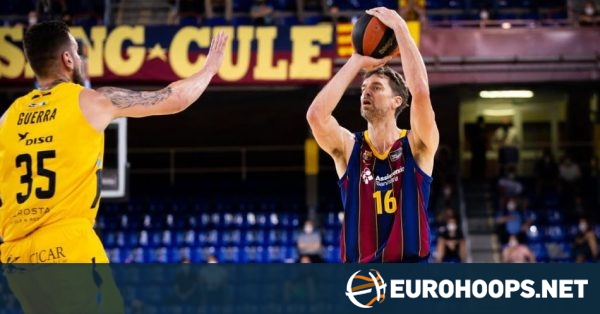 Pau Gasol aims to help FC Barcelona capture its 19th domestic title and third of his own. His return in February receiving an enthusiastic response from the fans has been followed by strong outings all the way up to the best-of-three series determining the Spanish league champion.

“This can be my last game,” he admitted in the buildup to Finals Game 2 planned to be held Tuesday evening at Barca’s home court, “I have been thinking for years that my last game could have been a long time ago due to the injuries. These thoughts have crossed my mind.”

Gasol, 40, averaged 4.6 points and 2.4 rebounds per Turkish Airlines EuroLeague game over his first seven appearances after a couple of decades. His side reached the championship game but lost to Anadolu Efes. He has also posted 10.3 points, 4.9 rebounds, and 1.2 assists per ACB match helping Barcelona advance to the Finals and win Game 1.

“I try to approach every game as if it is my last,” said Gasol determined to relish any remaining opportunity to play following the long and challenging stretch on the sidelines.

“He is much more than a teammate. He knows that. Everybody knows that. He is a brother to me,” explained teammate Nikola Mirotic, “To see how he is playing and enjoying the games, it is incredible. He helps us on and off the court. He arrived at a key moment for us.”

In the first collision with the rival from Madrid, Gasol posted eight points and eight rebounds for the team coached by Sarunas Jasikevicius.

The post Pau Gasol: “This can be my last game with Barcelona” appeared first on .

Jasikevicius: “Manresa is one of the worst teams we have ever…