In the postponed duel for Matchday 17, Spar Gran Canaria won the Movistar Academy, thus taking an important step forward in their fight for permanence. A match in which the Canarian team demonstrated at all times their desire for victory by taking the initiative against a Movistar Estudiantes team that missed Laura Quevedo and Leslie Knight. A few hours later, the leader Perfumerías Avenida made a big comeback in their Matchday 16 match in Tenerife to the bottom of the category by a 43-point advantage.

Valuable victory for the permanence of Spar Gran Canaria in Madrid on the track of a Movistar Students who could do little against the physical game of a rival launched for victory.

PHOTOS: The best images of matchday 16 on Flickr FEB

PHOTOS: The best images of matchday 17 on Flickr FEB

Movistar Estudiantes could not impose their pace of play during the first minutes of the game and that was the first symptom when announcing Spar Gran Canaria’s intentions. Because the Canarian players had arrived in Madrid ready to surprise and they did so throughout a solid defensive first quarter and quick transitions to soon see themselves up 10 points. From that moment on, the Madrid team began a fight against the clock in which the absence of Leslie Knight after his withdrawal began to weigh almost as much as the absence of a Laura Quevedo who has left the perimeter lame due to injury. A factor that balanced forces with the passing of the minutes when fatigue began to appear in the visiting team. Because the dispute in the match against Avenida, just 48 hours before, made a dent in a final stretch in which, however, Koné’s work and Caldwell’s points managed to close the victory (53-56).

Already in the afternoon session, the leader Perfumerías Avenida did not give any option to bottom Tenerife during his visit to Santiago Martín. A match in which the perfumers showed no signs of physical or mental wear despite playing their third match of the week, setting the pace of the game from the start. Thus, the partial of the first quarter (9-28) was a true reflection of what was to come, with a very comfortable Avenida on the track, working on defense and being effective on attack, so that the differences grew with the passing of the minutes. And the fact is that, despite the lack of rotation with three important losses, the team did not give their rival an option to recover the first place in the table after 40 minutes of dominance (47-90). 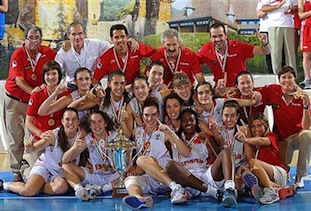