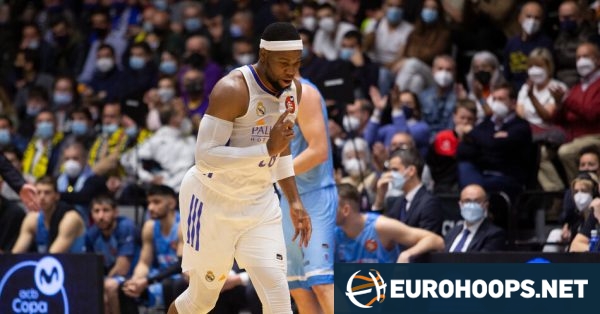 Guerschon Yabusele shot 5-6 from the three-point territory on his way to 20 points as he led Real Madrid in the 85-70 win over San Pablo Burgos in the Spanish Liga Endesa.

Alberto Abalde scored 13 points while Vincent Poirier had 12 points and ten rebounds. On the opposing side, Jarell Eddie and Landry Nnoko logged 14 points each.

With this victory, the Madridistas improved to 18-5 and are still, although temporarily, at the top of the standings. Meanwhile, Barca got the better of Real Betis with 83-63 and is second with a 17-4 record. Burgos (7-15) and Betis (6-16) are in the relegation zone at the moment.

Another Euroleague team stepped on the court in the Spanish league as well but didn’t come out on top. Baskonia was outplayed by Obradoiro with 81-76 on the scoreboard.

Laurynas Beliauskas banked in 22 points for the winning team while Henry Ellenson was right behind with 19. For Baskonia, Wade Bladwin scored 20 and Rokas Giedraitis 13 points.

This could spell trouble for Baskonia as they now hold a 12-10 record in the eighth spot and Breogan, as well as Gran Canaria and Bilbao, are chasing with 11 wins. Obradoiro got its eighth win and made an important step in securing its stay in the competition.

The post Real Madrid and Barca get wins on domestic front, Baskonia falls to Obradoiro appeared first on .

The new reality: The Endesa League postpones all matches…

The ACB postpones Valencia – Obradoiro due to a crown outbreak …