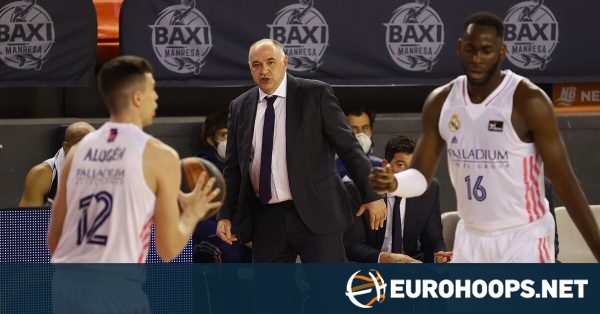 Nicolas Laprovittola drained the go-ahead free throws with six seconds to play as Real Madrid beat Baxi Manresa on the road 77 – 76 to capture its 12th straight win and 25th overall in 26 games of the Spanish ACB League.

After Laprovittola’s free-throws, Manresa found a good shot with Matt Janning but the veteran sharpshooter was off target.

Gabriel Deck had scored 11 straight points out of his game-high 17 to help Real repel Manresa’s comeback efforts from down 10 early in the fourth period. Edy Tavares had 10 points and 10 rebounds for Real as Pablo Laso distributed playing time among his players and also used youngster Tristan Vuckevic (five points in 17 minutes) ahead of the double-game EuroLeague week.

Eatherton had 17 points and Franco Ferrari 12 for Manresa.

One day later, Sunday, Brandon Davies made a couple of free throws with four seconds remaining securing the 81-79 home victory for Barcelona over Fuenlabrada.

The former BYU captain banked a game-high 23 points, including ten in the final period. Leandro Bolmaro added 13 points, a personal-best with the senior team. Rolands Smits also scored 13 points and Alex Abrines had 11.

Melo Trimble went for a team-high 17 points for the guests. Jovan Novak followed with 14 points.

Barca, resting Nikola Mirotic, improved to 24-3 off its tenth straight win across all competitions and 17th in a row at the domestic level. Fuenlabrada fell to 7-20.

Baskonia to donate proceeds from game tickets to Ukraine ref…

Barça complains to the ACB for not putting Mirotic in the…

Creepy!: Prepelic breaks his arm and will be low all…