Real Madrid blows out Baskonia on the road 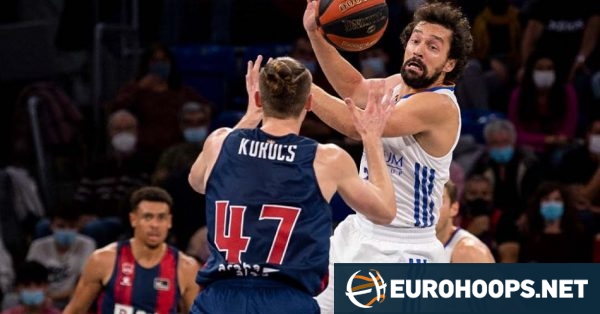 After going 1-1 in Russia through the Turkish Airlines EuroLeague two-game week, Real Madrid strolled past Bitci Baskonia, 83-65, on Sunday.

Guerschon Yabusele put up 14 points and Vincent Poirier posted a 12-point, 10-rebound double-double. Besides the French connection, Adam Hanga and Walter Tavares added 12 points each in the ACB Regular Season Round 8 contest.

Nigel Williams-Goss, Anthony Randolph, Carlos Alocen, and Trey Thompkins remained out for the Whites jumping to 7-1 and forcing Baskonia to 3-5. On the opposite end, Alec Peters and Sander Raieste were sidelined.

Another away game coming up next for Pablo Laso’s side with EuroLeague Regular Season Round 8 featuring a visit at FC Bayern Munich. The team based in Vitoria-Gasteiz will host Maccabi Playtika Tel Aviv. Both matches are scheduled for Friday.

Spanish League leader, FC Barcelona earlier made its way to 8-0 by taking down Urbas Fuenlabrada, 79-69. Coming up on Thursday, a visit at AX Armani Exchange Olimpia Milano in what is expected to be a heated battle of EuroLeague Regular Season Round 8.

In other ACB action, Coosur Real Betis upset Valencia, 84-81, on the road. Beka Burjanadze scored 18 points and Marko Todorovic 17 points. Slovenian Klemen Prepelic firing a game-high 21 points was not enough for the Oranges.

Dzanan Musa went for 22 points and Tyler Kalinoski scored 11 of his 12 points in the fourth quarter for Rio Breogan in the 94-89 home victory against UCAM Murcia.

The post Real Madrid blows out Baskonia on the road appeared first on .

“Carroll has been making Real Madrid dizzy for two years”