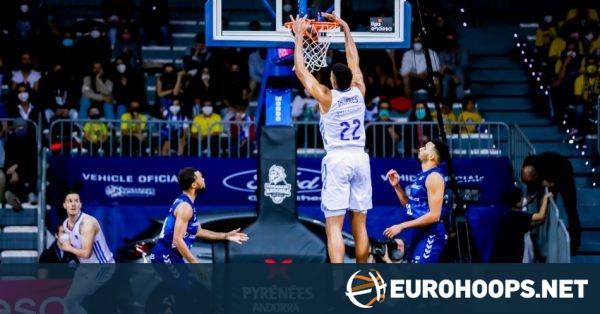 Real Madrid doubled its victories in the Spanish League by routing Andorra 86 – 58 on the road. The Blancos were particularly dominant in the second half were they outplayed their hosts 48 – 28.

Walter Tavares led a balanced Real offense with 15 points on 7-10 shots. He also had seven rebounds and seven blocks in 20:50 minutes.

Guerschon Yabusele finished with 12 points plus six rebounds and Adam Hanga scored 12 for Real. Nigel Williams-Goss had 10 points while Thomas Heurtel dished out eight assists – most of them to Tavares – to go along his five points. Real completed the game with 23 assists overall.

Only Moussa Diagne (10 points) scored in double figures for Andorra.

In Vitoria, Baskonia beat Fuenlabrada 95 – 86 for its second straight win in a row. Steven Enoch led Baskonia’s efforts with 23 points and nine rebounds while Jayson Granger had 18 points and seven assists.

Leo Meindl stood out from Fuenlabrada with 23 points plus five rebounds. Dusan Ristic finished with 13 points and nine boards.

Zaragoza makes a comeback and takes down Barca

An excellent Shannon Evans propels the Coosur Betis in Andorra

Ricky, Doncic … the Endesa Mini Cup as a star quarry …