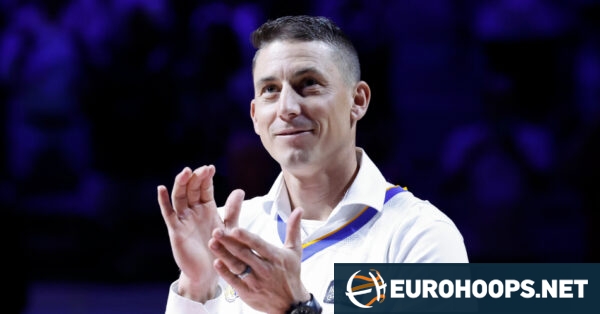 The night started in Madrid with a celebration for Jaycee Carroll who finally officially retired and ended with Real Madrid getting an easy 83-71 win over Baskonia and the 2-0 lead in the Spanish Liga Endesa semifinals.

Adam Hanga with 18 points – including an amazing buzzer beater almost at half court – was the top scorer, but Eddie Tavares with 15 and eight rebounds set the tone early for the winning side.

Real Madrid lead even by 16 (31-15) and got a 10-point halftime advantage (40-30).The hosts entered the last period leading by 21 (66-45) and the game was over. Baskonia trailed even by 28 (75-47) and ultimately managed to save some of its pride when the hosts relaxed. Vanja Marinkovic with 17 points was the top scorer of the losing side.

It has to be noted that with the backcourt of Real Madrid depleted by injuries, Thomas Heurtel was back in the active roster and was used in the last three minutes of the game for the first time after two months.

However the start of the night was Jaycee Carroll. In theory he had an open invitation from Real Madrid this season to join the team, something that never happened. The 39-year-old sharpshooter retired after winning 20 titles with Madrid and having the record of games played for the “Whites” for an non Spanish player. A two-time EuroLeague winner, he said goodbye to basketball and to Real Madrid in Spanish.

As he said, while thanking everyone in the organization of Real Madrid: “I had to come back for all the good memories I enjoyed here all these years and to thank Real Madrid for giving me the opportunity to live my dreams”.

The post Real Madrid gets 2-0 lead over Baskonia on Jaycee Carroll’s retirement night appeared first on .

Tavares’ wife dispels doubts about the future of the piv …