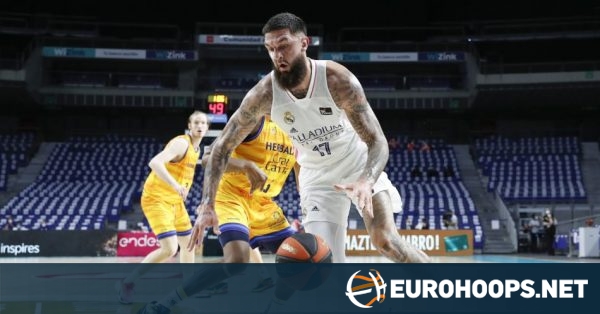 Real Madrid jumped into the Spanish ACB League playoffs in a ferocious fashion by defeating Gran Canaria 103 – 79 in Game 1 of the quarterfinals.

Vincent Poirier led the charge for Real with a double-double of 14 points and 11 rebounds. Nicolas Laprovittola finished with 14 points and six assist, Sergio Llull had 14 points and five dimes while Alex Tyus posted 13 points plus nine boards. The “Blancos” had a stunning 24 – 0 run from the mid of the first period to the beginning of the second quarter that helped got them up 36 – 11.

Gran Canaria kept trailing by a rather large margin until fighting back in the third period to lower the deficit to 78  – 64. The hosts once again established their dominance and didn’t allow their opponents to pose any danger.

Matt Costello had 23 points, AJ Slaughter 12 and Andrew Albicy from the Las Palmas side.

Laso now has 21 titles and complies with the tradition: not a year …

Llull’s tears, a reborn MVP: “I argued with my wife …

Murcia surpasses Manresa and takes a giant step towards …