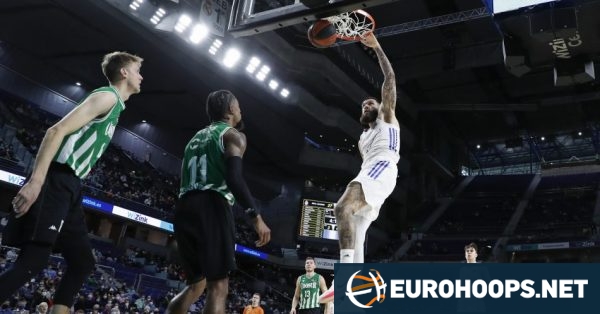 Real Madrid got the job done and defeated Real Betis 71-48 at home to win their fourth straight game in the Spanish Liga Endesa coming from back-to-back wins in EuroLeague in the recent double-game week.

The hosts imposed their game early on with a 16-2 lead after five minutes and never lost track for the remainder of the game.

Walter Tavares was among the top producers for Real with 11 points and 7 rebounds, Alberto Abalde added 11 points and Thomas Heurtel followed with 10 points and five rebounds. Real remains on top of the ACB standings with a 10-1 record.

Shannon Evans posted a game-high with 22 points, 5 rebounds for Betis, which now sinks further down the standings with a 2-9 record.

Jaime Pradilla led the way for Joan Penarroya’s squad with 21 points, Bojan Dubljevic posted a double-double with 16 points and 10 rebounds along with 5 assists and Klemen Prepelic fired 19 points.