Real rolls Barcelona for 2-1 lead in the ACB Finals 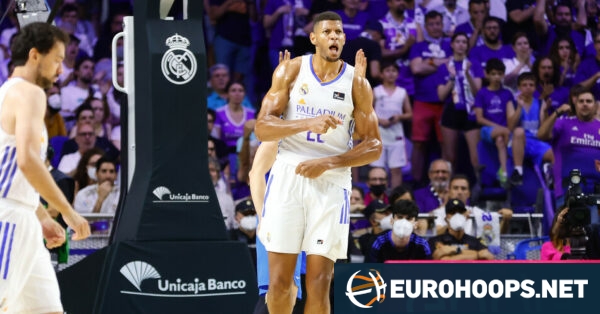 Real Madrid is back in the driver’s seat in the Spanish Liga Endesa finals after taking down Barcelona 81-66 in Game 3, with a chance to be crowned champion on Sunday.

Gabriel Deck led all scorers of Chus Mateo’s squad with 14 points and five rebounds, Fabien Causeur added 13 points, while Walter Tavares and Sergio Llull each tapped 10 points for the hosts.

Kyle Kuric paced Barcelona with 15 points and Nick Calathes followed with 10 points, as Nikola Mirotic exited the game with 9 points in 26 minutes.

Real got ahead with a 21-16 lead in the opening quarter and didn’t look back since, despite Barcelona’s efforts, especially in the second period and held on to a 46-39 advantage at halftime. The hosts expanded their lead up to 13 points at the end of the third quarter and Barcelona never recovered.

The post Real rolls Barcelona for 2-1 lead in the ACB Finals appeared first on .

Historic!: First Chinese player to debut and score in the …

Granger advances his goodbye to Baskonia