Walter Tavares’s reign as the EuroLeague Best Defender award winner will continue another year as the Real Madrid center was chosen to be the recipient of the trophy in a poll of Turkish Airlines EuroLeague head coaches. Tavares, 29, was a force in the middle for Los Blancos as he led the league with 1.8 blocked shots per game. His defensive impact stretched far beyond his blocks as Tavares’s presence was a constant source of intimidation for opponents, which resulted in countless close-range shots that were altered, missed or simply passed up. In fact, opponents challenged by Tavares made just 34.4% of their shots, according to Synergy Sports. That number was the best on his team and 11th in the league. Moreover, his 4.8 defensive rebounds per game led the league and sealed possessions, often allowing Real to get going in transition. Because each of the Turkish Airlines EuroLeague head coaches knows how difficult it is to plan to attack the paint against Real Madrid when Tavares is in the game, it was only natural that they would collectively choose as the 2020-21 EuroLeague Best Defender.

The Best Defender Trophy is one of several awards to honor the best players in the Turkish Airlines EuroLeague. The first of this season’s honorees was announced Wednesday when Alexey Shved of Khimki Moscow Region was confirmed as the winner of this season’s Alphonso Ford Top Scorer Trophy. The identity of the EuroLeague Rising Star will be revealed on Friday and the All-EuroLeague teams will be announced next week. The EuroLeague MVP award will be revealed at the 2021 Turkish Airlines EuroLeague Final Four in Cologne, Germany. The Alexander Gomelskiy Coach of the Year Trophy and the Gianluigi Porelli EuroLeague Executive of the Year are post-season awards.

For the season, the 2.21-meter Tavares averaged 11.4 points, 8.0 rebounds, 1.0 steals and 1.8 blocks for a performance index rating of 18.1. In addition to leading the league in blocks and defensive rebounds, Tavares ranked second in rebounding and fifth in PIR. He blocked multiple shots in 20 of his 36 appearances and tied his career-high with 5 against Olympiacos Piraeus in Round 15. His 63 blocked shots were more than half of his team’s total for the third season running, even though he accounted for less than 12 percent of the team’s total minutes played. Despite playing a career-high 26:01 minutes per game, Tavares fouled out only three times all season and was one of only three centers to average more than 1 steal per game.
A native of the African archipelago Cape Verde,

Tavares picked up basketball late in his childhood, but showed enough talent and potential that Herbalife Gran Canaria brought him to its academy when he was just 17. After spending the 2011-12 season and the beginning of the next season loan with La Palma, Tavares made his Spanish League debut with Gran Canaria in January 2013. Tavares earned All-EuroCup First Team honors in the 2014-15 season after helping Gran Canaria reach the finals. He later spent two seasons in the NBA and the G-League before joining Real in November 2017. Tavares helped Real win the EuroLeague in their first season together and has also won two Spanish league championships and the 2019 Copa del Rey with Los Blancos.

Tavares becomes the third player to repeat as EuroLeague Best Defender and the fourth to win the award multiple times. The first was Dimitris Diamantidis of Panathinaikos Athens (2005, 2006, 2007, 2008, 2009, 2011). Dunston (2014 and 2015) won the award in consecutive seasons with Olympiacos in 2014 and 2015 and Hines was chosen Best Defender with CSKA Moscow in 2016 and 2018. In addition to those mentioned above, CSKA players Victor Khryapa and Andrei Kirilenko won the award in 2010 and 2012, respectively, Stephane Lasme was the 2013 winner with Panathinaikos and Adam Hanga took the trophy in 2017 with Baskonia. 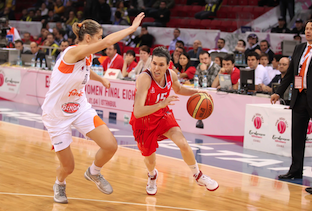