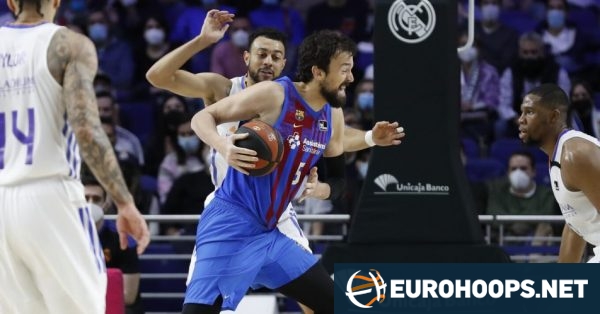 Turkish import Sertac Sanli poured 17 points to go along with five rebounds in the Clasico highlighting ACB Regular Season Round 16.

Kyle Kuric ended up sharing the game-high 17 points. Nikola Mirotic followed with 13 points, including seven in the final quarter.

Pierre Oriola and Alex Abrines remained on the injury list with Dante Exum also not suiting up for the team led by Lithuanian tactician Sarunas Jasikevicius.

Pablo Laso’s side missed Fabien Causeur. Carlos Alocen and Trey Thompkins were out as well. Walter Tavares had 12 points and Sergio Llull 11 points in the losing effort.

The Turkish Airlines EuroLeague and ACB giants exchanged blows until Barca assumed control late in the first half and retained the lead through the second half. The distance went from 12 points to shooting distance down the stretch but the visitors did not let go to clinch the victory.

The win improving the domestic record to 12-3 forced the Whites down to 16-2. Baxi Manresa follows in third place at 12-6.

UCAM Murcia held on to beat Lenovo Tenerife, 88-86, to up its record to 10-6. The Basketball Champions League outlet fell to 8-7.

Suit for Barcelona: Cory Higgins will undergo surgery and this…