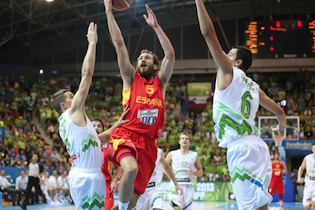 Host country Slovenia leaned on a huge rally down the stretch to escape with a huge gigantic 78-69 upset over defending champions in Spain in day two of the EuroBasket Men 2013 in Slovenia. Heading into the match as a heavy favorite based on their previous meetings, Spain proved why they are the gold-medal favorites as well after building a 33-25 lead at the half.

However, the break seemed to have worked wonders for Slovenia, who turned the tables around in the third period, outscoring the defending champions, 27-18, to take a one-point lead heading into the final period.

The two teams then went toe-to-toe in the final quarter. Spain was 68-67 in the 3:39 mark of the match, but they suddenly went cold as Slovenia stepped up on both ends of the floor, ending the match with a huge 11-1 rally en route to the huge upset.

“It’s not easy to play against Spain because all their players are so strong technically and tactically but this was motivation for everybody. Everyone is motivated to give 120% against Spain,” Slovenia coach Bozidar Maljkovic.

Goran Dragic finished the game with 18 points with six of it coming in the 11-1 run, while veteran Bosthan Nachbar scored the other five points in the decisive run to finish with 14 markers. Zoran Dragic added 12 points for Slovenia, which shot 46.6 from the field in the game.

Marc Gasol, on the other hand, led Spain with 17 points and seven rebounds, but had five turnovers, while Jose Calderon chipped in 14 points, but their efforts were not enough to help Spain dodge the upset axe.

“I think in the first half we controlled the game, the problem was in the second half. We could not play as well on defense, we had problems with the pick and roll and they also made some very difficult shots, sometimes at the end of the possession,” said Spain coach Juan Orenaga.