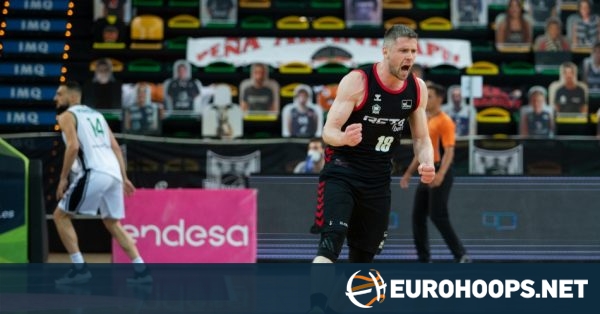 RETAbet Bilbao prevailed, 94-73, over Joventut Badalona to secure a spot in next season’s ACB. The outcome of Sunday’s contest forced Movistar Estudiantes to the second division.

Estudiantes was one of three teams participating in every single edition of Spain’s top-tier division since 1957, alongside Real Madrid and Badalona. The team was relegated in 2012 and 2016 as well, but on both occasions eventually remained after promoted teams resigned from moving up.

In a must-win situation, nine triples in the first half helped Bilbao recover from a slow start. John Jenkins registered a team-high 13 points hitting three of the 17 three-pointers. Jaylon Brown, Arnoldas Kulboka, and Ioannis Athinaiou added 11 points each in the Regular Season Round 38 contest. Vladimir Brodziansky posted a game-high 24 points for the guests.

Badalona was already locked in the seventh seed and a playoff series against FC Barcelona. Valencia will take on TD Systems Baskonia and Lenovo Tenerife will collide with Hereda San Pablo Burgos in other quarterfinal pairings.

Real Madrid, which finished the regular season with just two losses (34 wins), will face the team ranking eighth and that spot was secured by Herbalife Gran Canaria after the win over Real Betis.

The quarterfinal matchups are as follows:

Kalinic wakes up Valencia and sinks the Estudio a little more …