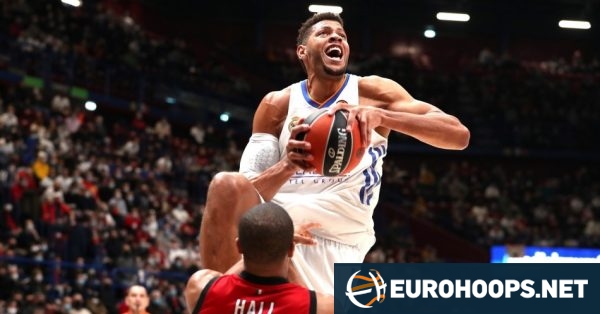 Tavares, 29, scored eight of his 19 points in the fourth quarter of the rescheduled ACB Regular Season Round 17 contest. Pulling down 13 rebounds made out a double-double. Rudy Fernandez added 15 points. Guerschon Yabusele with 12 points, Nigel Williams-Goss with 11 points, and Fabien Causeur with ten points wrapped up the double-digit scoring pack.

The Whites, fresh out of the COVID-19 outbreak, finished their first game since December 23 with a 9-2 run to retake the lead and secure the win. Improving the league-leading record to 14-1 created a two-game distance over FC Barcelona following in second place of the Spanish League table.

Except for injured Carlos Alocen and Trey Thompkins, the remaining players were all available since most more cleared after following coronavirus health and safety guidelines implemented by local authorities.

Manresa, among the teams earning a direct spot in the Basketball Champions League Round of 16, fell to 8-6 at the domestic level. Joe Thomasson had 15 points, while Ismael Bako and Yankuba Sima followed with 13 points each in the losing effort.

Unicaja has also clinched a berth to the BCL Round of 16 but in this case generated more momentum by blowing out Casademont Zaragoza, 112-72, to improve its domestic tally to 7-8. French Axel Bouteille registered 19 points in the postponed Round 16 fixture. Jonathan Barreiro followed with 17 points against his former team. Jordan Bone’s game-high 21 points went to waste for the visitors.

The post Tavares scores 19 points as Real Madrid returns to action with a win appeared first on .

Barça clings to Davies and Mirotic to tighten the E League …

Ricky, Doncic … the Endesa Mini Cup as a star quarry …

The mythical Tonecho Lorenzo puts the emotional touch to the day …