ANDhe Casademont Zaragoza took the Bilbao Arena this Thursday beating, by 76-100, a Surne Bilbao Basket that barely offered opposition beyond the even first quarter and that did not compete as he wanted in his reencounter with the ‘black tide’ after almost a year without an audience in Miribilla.

The day that was going to be designated for the Basque team and its fans was a disappointing afternoon due to the enormous superiority of a handy team.

A choral work by those of Jaume Ponsarnau translated into a tremendous success (23/37 in T2 and 15/31 in T3) and a manifest superiority in the rebound (23-40). Data that, like that of the final score, do not need additions.

For Bilbao Basket, which recalled its worst moments of last year on the verge of relegation, and especially the matches against Zaragoza, Ludde Hakanson (12 and 14) barely pulled the car at the start and tried to react with everything almost lost Captain Jonathan Rousselle (18 and 18) and Andrew Goudelock (12).

The ‘Minibamba’, however, disappointed like the also new Ángel Delgado (6 and 4) and Valentin Bigote (3 and -3).

Delgado opened the scoring for an initial 4-0 by Surne Bilbao that was quickly countered by Mobley and Casademont Zaragoza (4-7).

The hand team also acquired four points of advantage (8-12), although the locals reacted at the hands of Hakanson to end the first quarter with precisely that maximum advantage with some good final minutes from Withey.

Zaragoza came back at the beginning of a second quarter, with five points between McLean and Javi García (20-21), in which they still recovered momentarily, the Bilbaoans entered one of those crises that they suffered last year.

Especially Delgado, whose minutes of mistakes in the two zones joined the edge of Mobley to chain a 0-14 (25-39), later extended to 4-22 (29-43), which threatened to break the match before a second half which was reached with a clear visitor advantage (31-43).

Those in red kept their distance in the third quarter, hammering the local ring with amazing ease to start the last ten minutes 16 up (53-69). They even stopped a burst of genius from the hitherto off Goudelock, who scored 8 points in a row and brought his team closer to 12 points (42-54).

Rousselle tried something similar at the beginning of the last quarter (57-69), but Zaragoza did not forgive and even widened the difference to make it insurmountable with Waczinsky (67-88, 3.43) very successful from the triple.

The thing did not stop there and the beating was increasing until 73-100 before the final 76-100.

Incidents: match corresponding to the second day of the Endesa League played at the Bilbao Arena in Miribilla without less than 4,000 spectators, which was the number of fans who could attend the clash due to sanitary restrictions.

Hanga: “When Madrid called me it was very clear to me. It cost me …

Huertas and Shermadini give Lenovo Tenerife a long-suffering win… 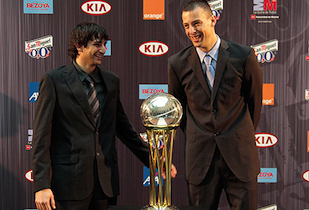