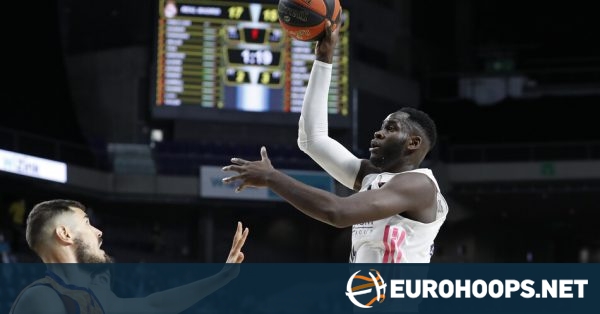 Real Madrid successfully held off Valencia’s comeback effort for an 80-77 win with which the Whites win the Spanish semifinal series 2-1.

Despite being down nine points (68-59) early in the fourth quarter, Valencia made it a one-possession game (68-67) thanks to a spark by Nikola Kalinic. However, Real Madrid successfully held them off thanks to big baskets by two youngsters – Carlos Alocen and Usman Garuba – as well as Jaycee Carroll.

Garuba’s effort was indeed crucial in holding off Valencia’s comeback run as he scored six points down the stretch including a three-pointer, his third of the game.

In addition to going 3-5 from deep, Garuba finished with 16 points and 14 rebounds in the 27 minutes he spent on the floor. Fabien Causeur added 15 and Sergio Llull 13 for the Real Madrid squad which advanced to the Finals where they’ll face Barcelona or Tenerife (1-1).

On Valencia’s side, Kalinic scored 13 while Klemen Prepelic and Mike Tobey helped out with 11 points each.

Pablo Laso and Madelén Urieta, best coaches of the year by …